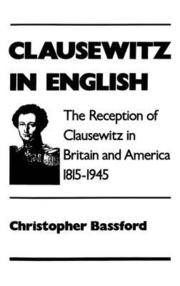 This work of intellectual history examines the reception of Carl von Clausewitz's military theories in Britain and the United States up to 1945. Christopher Bassford argues that the impact of Clausewitzian theory - particularly the classic On War, published in 1832 - has been underestimated and he follows the trail of Clausewitzian influence from pre-1873 Britain to 1945. Clausewitz in English will be of interest to a wide range of military and intellectual
historians.