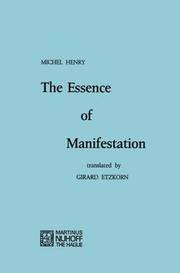 The Essence of Manifestation

This book was born of a refusal, the refusal of the very philosophy from which it has sprung. After the war, when it had become apparent that the classical tradition, and particularly neo-Kantianism, was breathing its last, French thought looked to Germany for its inspiration and renewal. Jean Hyppolite and Kojeve reintroduced Hegel and the "existentialists" and phenomenologists drew the attention of a curious public to the fundamental investigations of Husserl and Heidegger. If only b