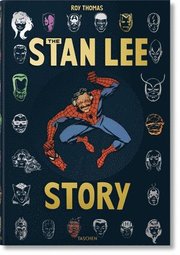 This is the big one, True Believers! The mostly true tale of Stan Lee: a Giant-Size extravaganza, nearly ten years in the making, about the one and only Godfather of Comics. From his childhood in Depression-era New York, to transforming Marvel into the number one comics publisher in the world, to his 21st-century reinvention as Chief Creative Officer of global entertainment company POW! Entertainment, Stan "the Man" Lee stands the test of time as the most legendary name in comicbook hi