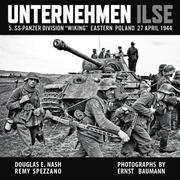 UNTERNEHMEN ILSE (Operation Ilse) is a visual account of one of the most photographed but least known battles on the Eastern Front. Conducted by the 56th Panzer Corps on 27 April 1944 in the area west and southwest of the Polish city of Kovel, which had been encircled by two Soviet armies for nearly a month before a combined Army and Waffen-SS relief force fought its way through and liberated the garrison. However, after its relief, Kovel was connected to the outside world by only a narrow strip